On the Recursive Nature of Recursion: Reflections on the AEA 2013 Conference 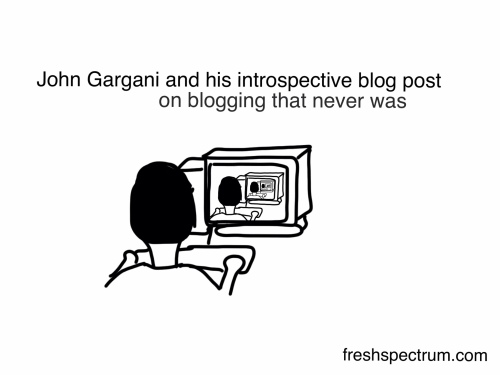 Chris Lysy at Freshspectrum.com noticed, laughed at, and illustrated (above) the same phenomenon as it relates to my blogging (or rather lack of it) during the American Evaluation Association Conference last week.

Once Chris opened my eyes to the recursive nature of recursion, I noticed it all around me at the conference.

For example, the Research on Evaluation TIG (Topical Interest Group) discussed using evaluation methods to evaluate how we evaluate. Is that merely academic navel gazing? It isn’t. I would argue that it may be the most important area of evaluation today.

As practitioners, we conduct evaluations because we believe they can make a positive impact in the world, and we choose how to evaluate in ways we believe produce the greatest impact. Ironically, we have little evidence upon which to base our choices. We rarely measure our own impact or study how we can best achieve it.

ROE (research on evaluation, for those in the know) is setting that right. And the growing community of ROE researchers and practitioners is attempting to do so in an organized fashion. I find it quite inspiring.

A great example of ROE and the power of recursion is the work of Tom Cook and his colleagues (chief among them Will Shadish).

Experiments and quasi-experiments differ principally in how they create comparable groups. Experiments assign people to groups at random. In essence, names are pulled from a hat (in reality, computers select names at random from a list). This yields two highly comparable but artificially constructed groups.

Quasi-experiments typically operate by allowing people to choose experiences as they do in everyday life. This yields naturally constructed groups that are less comparable. Why are they less comparable? The groups are comprised of people who made difference choices, and these choice may be associated with other factors that affect outcomes. The good news is that the groups can be made more comparable–to some degree–by using a variety of statistical methods.

Is one approach better than another? At the AEA Conference, Tom described his involvement with efforts to answer that question. One way that is done is by randomly assigning people to two groups–one group that will be part of an experiment or another group that will be part of a quasi-experiment (referred to as an observational study in the picture above). Within the experimental group, participants are randomly assigned to either a treatment group (e.g., math training) or control group (vocabulary training). Within the quasi-experimental group, participants choose between the same two experiences, forming treatment and comparison groups according to their preference.

Program impact estimates are compared for the experimental and quasi-experimental groups. Differences at this level are attributable to the evaluation method and can indicate whether one method is biased with respect to the other. So far, there seems to be pretty good agreement between the methods (when implemented well–no small achievement), but much work remains to be done.

8 responses to “On the Recursive Nature of Recursion: Reflections on the AEA 2013 Conference”